After looking through my Goodreads I've realized that so far this year I haven't read as many great books as I would have liked. Nevertheless I managed to find 10 that deserve to be in this list.

“The Last Letter From Your Lover” by Jojo Moyes
☆☆☆☆☆
Genre: Romance 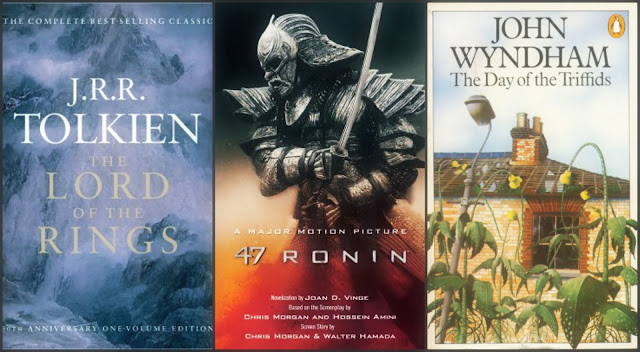 “The Day of the Triffids” by John Wyndham
☆☆☆☆
Genre: Sci-fi

So this are my top ten books so far this year. I loved and recommend all of them. If you've read any of these books please leave a comment with your thoughts. Recommendations for similar books are also very much appreciated :)
Posted by Жана Т. at 11:08 AM No comments:

Top 5 Wednesday: Characters You Wish You Could Drown

This Wednesday the topic is "Characters You Wish You Could Drown" and I'm sure I can think of more then 5 of them - so I'll try to be original here if possible.

Anastasia Steele from "Fifty Shades" Trilogy by E.L. James
There are no words. I hated Anastasia and her "inner goddess" so much that I don't even know how I managed to finish these so called "books". She was constantly annoying and stupid - I didn't know if I should laugh or cry or throw the book out of the window.
So, hands down this is the first character I can think of that deserves such a painful death as drowning.

Margaret Beaufort from "The Red Queen" by Philippa Gregory
Again, a main character from one of the books that I've read. I love these series by Philippa Gregory (in case you are wandering this is book 2 in "The Cousins' War" series) but this book was about my least favorite character. Margaret Beaufort is full of hatred woman, a fanatic, pure evil and she thinks so highly of herself. She thought she is the next Joan of Arc and her doings were "God's will"...get a grip woman, you are just insane.

Peter Pan from "Peter Pan" by J.M. Barrie
Yes, I hate Peter Pan. I find his character very immature. I know he is a kid but I really wanted to beat the crap out of him a couple of times. It's a shame because I really enjoyed the movies when I was young but when I read the book - oh, boy...what stupid decisions you've made, Peter.

Emma from "Emma" by Jane Austen
Well, I'm really sorry about this one, but I can't stand Emma. She is so spoiled and so judgemental even though she understands nothing about human nature and she can't even see her own mistakes and flaws.

Ramsay Bolton from "A Song of Ice and Fire" series by George R.R. Martin
This may come as no surprise for the people who've read the books or at least watched the TV series. I can't even look at this guy's face when he appears. How can a person be so evil?! I can't even talk about him, I'm sorry. I'm sure most of you feel the same way. 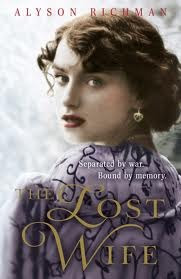 
"There on her forearm, next to a small brown birthmark, were six tattooed numbers.

`Do you remember me now?` he asked, trembling.

She looked at him again, as if giving weight and bone to a ghost.

During the last moments of calm in prewar Prague, Lenka, a young art student, falls in love with Josef. They marry - but soon, like so many others, they are torn apart by the currents of war.

In America Josef becomes a successful obstetrician and raises a family, though he never forgets the wife he thinks died in the camps. But in the Nazi ghetto of Terezín - and later in Auschwitz - Lenka has survived, relying on her skills as an artist and the memories of a husband she believes she will never see again.

Now, decades later, an unexpected encounter in New York brings Lenka and Josef back together.

From the comfort of life in Prague before the occupation to the horrors of Nazi Europe, The Lost Wife explores the endurance of first love, the resilience of the human spirit and our capacity to remember." - Goodreads

I don't remember reading the synopsis before diving into this book. I got it from the library because I read another book by this author and it was wonderful. After making that clear I must say I am so so happy that I read this book without having anyone around me because I was crying almost throughout the whole thing.

The book was so heartbreaking and dealt with such a heavy subject - the Holocaust. There is no chance to stay indifferent to this novel because it is so real and so well written. Honestly, I did not care about the characters (which were nevertheless well developed) as much as the story itself - especially Lenka's who had to survive in the concentration camps (and she managed to do that in both Terezín and Auschwitz despite of all the sorrow she had to deal with).

The glimpse of romance was a nice addition in the story but it was not overpowering the horror of what the book was all about which I am really gratefull for. Nevertheless, it was the intense feelings of love and appreciation which brought the tears to my eyes.

Overall I loved this book and I recommend it to everyone who likes reading about the Holocaust or heartbraking stories although I feel that everyone can like this book.
Posted by Жана Т. at 5:25 PM No comments:

Book Review: "The End of Everything" by Megan Abbott 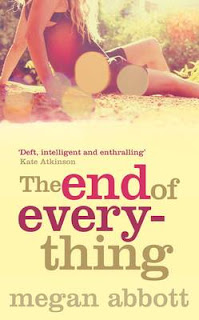 "A close-knit street, the clink of glass on glass, summer heat. Two girls on the brink of adolescence, throwing cartwheels on the grass. Two girls who tell each other everything. Until one shimmering afternoon, one of them disappears. Lizzie is left with her dread and her loss, and with a fear that won’t let her be. Had Evie tried to give her a hint of what was coming, a clue that she failed to follow?

Caught between her imaginary guilt, her sense of betrayal, her own powerful need, and the needs of the adults around her, Lizzie’s voice is as unforgettable as her story is arresting." - Goodreads

I did like this book, but not as much as I expected considering the fact that it is a mystery novel which I usually go crazy for. The story sounded just like the ones I would love, but alas that was not the case.

On the plus side, the novel was very beautifully written and easy to read - I finished it in one sitting. There was something about it though that left me a little bit confused throughout the whole book which led to me not loving it.

About the characters, I found the main one - Lizzie, very annoying and a little bit dull. Her way of thinking was so bizarre to me that I could not relate to her at all. Evie and her sister Dusty were not flowers either. What are those girls even thinking...I cannot comprehend it. Although the characters were not likeable, you can actually learn something from their awfully stupid behaviour.

Overall I do not regret reading this book, but it could have been way better.

If some of you have read this novel, please leave me a comment what you thought about it and I'll be happy to read it.
Posted by Жана Т. at 4:52 PM No comments: