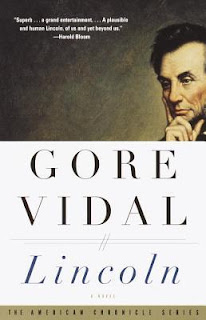 
"Gore Vidal's Narratives of Empire series spans the history of the United States from the Revolution to the post-World War II years. With their broad canvas and large cast of fictional and historical characters, the novels in this series present a panorama of the American political and imperial experience as interpreted by one of its most worldly, knowing, and ironic observers.

To most Americans, Abraham Lincoln is a monolithic figure, the Great Emancipator and Savior of the Union, beloved by all. In Gore Vidal's Lincoln we meet Lincoln the man and Lincoln the political animal, the president who entered a besieged capital where most of the population supported the South and where even those favoring the Union had serious doubts that the man from Illinois could save it. Far from steadfast in his abhorrence of slavery, Lincoln agonizes over the best course of action and comes to his great decision only when all else seems to fail. As the Civil War ravages his nation, Lincoln must face deep personal turmoil, the loss of his dearest son, and the harangues of a wife seen as a traitor for her Southern connections. Brilliantly conceived, masterfully executed, Gore Vidal's Lincoln allows the man to breathe again." - Goodreads


After reading “Abraham Lincoln: Vampire Hunter” by Seth Grahame-Smith, which I really loved, I was interested in learning more about the person, who inspired the book so to speak. So, that’s the reason I picked up “Lincoln” by Gore Vidal from the library. It is a really, really massive historical fiction book and it took me a whole week to finish it.

Yes, a whole week. But I really liked the book. I don’t know if it’s historically accurate but I learned a lot about Lincoln and his entourage and about the Civil War.

Although Lincoln was not my favorite person in the book I think his character was very deep. Some of the times I was not sure what was he thinking or what his actions are going to be and the reasons for them...Nevertheless, I really liked his character, but my favorite one was John Hay - the private secretary and assistant to Lincoln. I don’t even have any reasons for liking him, I just did. I found his character to be very sympathetic and easy to fall in love with. The character that I just couldn’t click with was Mary Todd Lincoln – aka Lincoln’s wife. I just hated that woman. She did so much bad things, because she just couldn’t contain herself while spending money. I mean $ 10,000 for a carpet…really…

There is not much I can say about the story, because I focused mainly on the characters while reading. Still, I found the book to be full with intrigues and conspiracies and drama (yes, I’m talking about Mary again). The Civil War was not very heavily expressed in the book although there were some very vivid scenes. The book was more focused on the Politics and how the government works and how decisions were made.

I’m actually not really interested in Politics, but I liked this book and that side of it didn’t bother me that much. That may be the reason I finished the book so slowly although I think it’s because the book was huge and with tiny font. So, despite of the fact that I gave this book a 3-star rating on Goodreads, I recommend it to people who want to know more about Lincoln.

If you've read this book, leave me a comment with your thoughts on it. I'll be happy to see some other opinions :)
Posted by Жана Т. at 9:48 AM