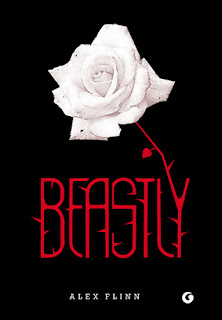 A beast. Not quite wolf or bear, gorilla or dog but a horrible new creature who walks upright—a creature with fangs and claws and hair springing from every pore. I am a monster.

You think I'm talking fairy tales? No way. The place is New York City. The time is now. It's no deformity, no disease. And I'll stay this way forever—ruined—unless I can break the spell.

Yes, the spell, the one the witch in my English class cast on me. Why did she turn me into a beast who hides by day and prowls by night? I'll tell you. I'll tell you how I used to be Kyle Kingsbury, the guy you wished you were, with money, perfect looks, and the perfect life. And then, I'll tell you how I became perfectly . . . beastly." - Goodreads

This book is a definite guilty pleasure for me. I know a lot of people hate and trash this book, but I quite enjoyed it. Let me share with you some of the pros and cons of this book.

Pros:
The plot took a lot from Disney’s “Beauty and the Beast” which is one of my favorite animations – for example: Bell’s passion for books, the awesome library of the Beast, roses and magical mirror and a couple of others.

Despite taking a lot from the classic, the author added a contemporary feel to the book – hate in high school, social groups and cast offs, etc.

The protagonist of the story had a nice development throughout the book – he went from being a sexy asshole to a nice and lovable beast.

I really loved the way in which the author presented both Kyle’s and Linda’s fathers. They were not really nice people – Kyle’s father treated him with such a disregard, while Linda’s father was an alcoholic drug addict. Those were really nice touches that added a little bit of something to the story.

As far as the others characters – I really loved the witch and the private teacher. They had awesome personalities, were really smart and they were not left out from the story – you are provided not only with a brief backstory for them, but also with a little bit of after story.

Cons:
As much as I like the original story, I don’t believe that in the society that we live in someone will actually fall for a really hairy guy. So I much prefer the movie take on Kyle’s new looks – scars and all that jazz.

Another thing I did not like was the chat between all these other fairytale characters such as the Little Mermaid and the Frog Prince. I just don’t think it added anything to the story.

That sums up my experience with this book. If it sounds like your cup of tea – read it and share your thoughts with me in the comments :)
Posted by Жана Т. at 6:33 PM