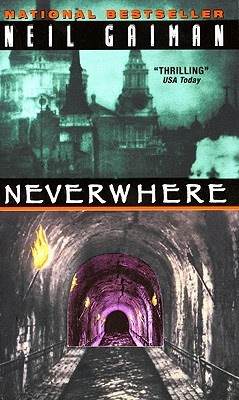 
"Richard Mayhew is a plain man with a good heart - and an ordinary life that is changed forever on a day he stops to help a girl he finds bleeding on a London sidewalk. From that moment forward he is propelled into a world he never dreamed existed - a dark subculture flourishing in abandoned subway stations and sewer tunnels below the city - a world far stranger and more dangerous than the only one he has ever known..." - Goodreads

I've read Neil Gaiman's book before and I was not impressed so I was not expecting to like this one...surprisingly I did enjoy it a lot. It was some kind of mixture between "Alice in Wonderland" and "The Master and Margarita" but better.

The story was well written and very captivating. There were a few surprises in the book that I did not see coming which was a good bonus.

The characters were well developed and some of them very unpredictable (yes, I'm talking about Marquis de Carabas - he was so adorable). I also liked the villains - one of them creepy and the other a little bit stupid but both were great team.

The only thing I did not like about this book was the ending - and here I mean the way in which the main villain was defeated. I did not see it coming but it was way too easy.

So, tell me in the comments if you've read this book and if your feelings about it differ from mine. Also if you have any other comments I'll be happy to read them :)
Posted by Жана Т. at 9:49 AM