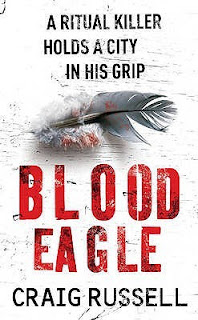 "The first woman had her lungs ripped out. When the same gruesome ritualistic method was used again, it was clear that the same killer was responsible. But there is no precise evidence to link the two cases, except for the tantalising email. In his first crime novel, Craig Russell introduces us to a new detective hero, Jan Fabel - half-Scottish, half-German - a man of conscience and imagination. Russell has also created a richly textured scenario where the City of Hamburg plays a central role - it is a city where the old Germany combines increasingly with the new, where gangs from Turkey and the Ukraine battle for supremacy. Blood Eagle is a violently exciting thriller and Fabel's desperate attempt to solve the case before more victims are discovered, gradually uncovers layer upon layer of intrigue. How can he track a murderer who leaves no trail, whose victims seem purposefully random and whose motive reaches far beyond greed and lust, into the darkest recesses of the human soul?" - Goodreads

Merry Christmas!
What better way to end this blogmas, than posting a review of a mystery novel, am I right?!

Once in a while I take my time and read some mystery books. As much as I would like sharing some really whimsical thoughts about them, I always find it hard to describe what they are all about. But let's give it a try, shall we?

The plot is not very different from every other mystery novel I'm afraid, but the writing style was drawing me in, so I ended up finishing this novel in less than two days. There were a lot of Norse mythology references in the book mixed up with some present-day political issues, which I really liked. The supposed gory scenes were not gory enough for me, but I will let this slide by me, since this is not a horror novel.

As far as the characters go, they were developed well enough. I did not feel particularly connected with anyone of them, but I suppose there will be some more development in the next books.

Now about the ending of the book -  I hope there will be some kind of explanation or continuation of it in the next book, because it was a little bit unsatisfying for me. For real, I closed the last page and I was like...

These are my feelings, a little bit mixed but I still really liked the book. If you enjoy reading thrillers/mystery/crime novels, give this series a try :)
Posted by Жана Т. at 9:07 AM