Disclaimer: This book was sent to me by the author in exchange for an honest review. 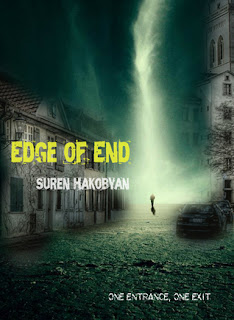 "Jonathan wakes up in a desert, his past wiped from his head. He’s alone having no clue who and what he is, where he has come from and where he should go. There is only one way – forward when he spots a little town in the distance.

Empty streets, old houses, the town seems abandoned. There’s no one to ask for help, there’s nowhere to go. Jonathan wanders the deserted town in search of any sign of life trying to bring his lost memories back, but odd visions haunt him from time to time. Soon Jonathan comes to the realization that he’s moments from death as absolutely evil dwells in the town seeking fresh souls. The seemingly dead town is only outwardly empty.

Grey skies, no sun, no days and no nights. The town is stuck in time. With only one entrance and one exit, but the way leading to the exit is filled with creations that Jonathan has never envisioned, even in his worst nightmares.

Who is he? Who brought him here? With a female resident – Elizabeth, Jonathan has to work his way through the horrendous town, figure out his past and find the exit." - Goodreads


Get a free copy of the e-book:

First off, I want to thank the author for giving me the chance to read this amazing book. It was just what I wanted - a standalone fantasy! May I just say how hard it is to find a decent standalone fantasy novel nowadays. The book world is flooded with thousands of great fantasy series, but I just want something unique, that can be wrapped up in just one lovely read.

Now, about this story, I don't think I've ever read something about the afterlife (or the so called Limbo), but I really liked the topic. The story was interesting and very well developed. The book was full of action and there were some gory scenes for colour. The beasts were so lovely described, that I'm so sure I don't want to meet them in real live...because I will die...fast. I'll be their first prey actually.

The main characters were intriguing and not perfect, which was a really nice surprise since most of the main characters in huge part of the fantasy books out there don't seem to have any flaws and are often described as perfect by their love interests.

The writing style of the author is brilliant. Everything is described so vividly that I can imagine every single scene, I can almost put myself in the shoes of the characters and feel the struggle, which they are going through.

Overall I really liked the book and I'm really happy that I had the chance to read it. I do recommend it for people who like fantasy stories with a hint of horror.
Posted by Жана Т. at 12:09 PM