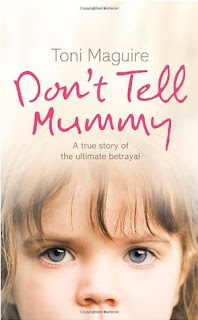 "This heart-wrenching memoir from Toni Maguire tells the deeply moving story of an idyllic childhood that masked a terrible truth. Underneath her mother's gentility and her father's roguish charm lay horrifying secrets, which eventually led to their only child's near destruction.

The first time her father made an improper advance on Toni, she was six years old. Her father warned her not to tell her mother, or anyone else, because they would blame her and wouldn't love her any more. It had to remain ‘our secret.’

When she finally built up the courage to tell her mother what had happened, she was told never to speak of the matter again. With no one to turn to, isolated and alone in rural Ireland, the abuse continued unhindered.

At fourteen Toni fell pregnant by her father, and when her state was discovered she was made to have a late abortion which almost killed her. The truth of her childhood could no longer be kept hidden but, just as her father predicted, Toni found herself judged and rejected by her family, teachers and friends. The blame and anger she was treated with only worsened when her father was sent to prison as a result of his actions. This is the compelling story of her struggle to put the ghost of her childhood to rest, and emerge ultimately triumphant." - Goodreads

This was such an emotional ride. By the middle of the book I hated not only Toni's parents, but almost every single person in. I was so infuriated by the fact that the supposed to be adults, blamed a kid for being abused. Are you kidding me? Even doctors and psychiatrists, who are supposed to be more understanding and most importantly careful, when it comes to dealing with children, who have been abused, are spreading hatred and blame toward the kid. And even have the nerve to ask her if she liked it??? What planet are you from - of course she didn't like it - are you all out of your freaking mind people?!

I'm not here to comment on the writing style, plot and character development, because this is no fiction. It is just a powerful read about something real. If you want something real and devastating, this is your read.
Posted by Жана Т. at 12:45 AM