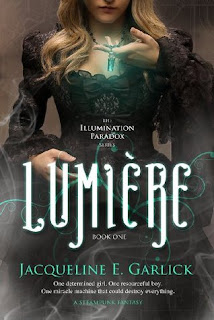 "One determined girl. One resourceful boy. One miracle machine that could destroy everything.

After an unexplained flash shatters her world, seventeen-year-old Eyelet Elsworth sets out to find the Illuminator, her father’s prized invention. With it, she hopes to cure herself of her debilitating seizures before Professor Smrt—her father’s arch nemesis—discovers her secret and locks her away in an asylum.

Pursued by Smrt, Eyelet locates the Illuminator only to see it whisked away. She follows the thief into the world of the unknown, compelled not only by her quest but by the allure of the stranger—Urlick Babbit—who harbors secrets of his own.

Together, they endure deadly Vapours and criminal-infested woods in pursuit of the same prize, only to discover the miracle machine they hoped would solve their problems may in fact be their biggest problem of all." - Goodreads

Before saying anything about the book, let's just admire this gorgeous cover for a while.

Enough admiring. It's time for some real talk.

The truth is, that I really, really liked this book. My biggest problem with it was all the technology involved. I know this is steampunk, technology is to be expected, but can you at least make it easy for me to understand what the f* is going on??? All this tech-talk made me stare dumbfounded.

In the end I decided to ignore all this high-tech stuff and just follow everything else. Best decision ever! Because the story is actually really interesting. The book has little bit of dystopian and horror feel to it, which I loved. The deadly Vapours and the criminals, which were a version of zombies, were a really nice touch. Good job creeping me out!

The characters were a little bit annoying at times, but you know what - I really liked them for some bizarre reason. Eyelet was stupidly smart - meaning she is supposed to be smart, but her actions are stupid most of the times. Now let's talk about the male protagonist - Urlick. He is a definite BAE. Give me some flawed male characters! I love them! He and Eyelet has so much in common - both of them are smart and make some really dumb decisions! They are perfect for each other!

Considering the above, you may think I hated this book...but I didn't. It was really fun to read it. There were some unexpected twists here and there, which keep you on you toes, and I am definitely looking forward to reading the next book.

Have you read this book? Is your opinion any different? I would love to read anything you have to share with me in the comments :)
Posted by Жана Т. at 1:15 AM