Book Review: "The Danger in Tempting an Earl" by Sophie Barnes (Blogmas Day 4) 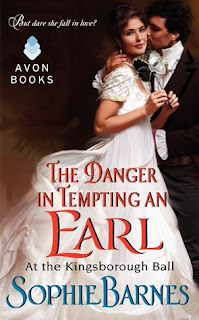 "Sophie Barnes does it again in this sizzling Regency-set romance where anything can happen at the Kingsborough Ball...

Lucien Marvaine never thought he was good enough for Katherine. As the younger son of an earl, he didn't have a title or prospects. Then fate steps in and gives him a second chance, and this new Earl of Roxbury is determined to make the beautiful Kate his own . . . one touch . . . one kiss at a time.

Katherine never thought of herself as a temptress, certainly not with Lucien. Why, she's known him almost all her life! Yet as she waltzes in Lucien's arms at the Kingsborough Ball, she can't help but be drawn to him. Has he always been this hard and masculine? And where did those dimples come from? Kate is not looking for a husband . . . but how can she not surrender to Lucien's charms when love is at stake?" - Goodreads

I have my moments, when I'm in a mood for some historical romance books. Most of the times I tend to enjoy them a lot. This book is no exception, although it's not the best in that genre.

What I liked about it is that there is no love at first sight, the main characters are friends since early childhood. There are no silly misunderstandings...at least not many of them, which is somewhat unusual for this type of novels.

The characters are not anything special. Actually the only characters you really get to know are Katherine and Lucien. The other characters are just there as a filling. At least that was my impression.

Overall, it's not something I will recommend, but I intend to read the other books in the series.
Posted by Жана Т. at 10:23 AM

Email ThisBlogThis!Share to TwitterShare to FacebookShare to Pinterest
Labels: Blogmas 2015, Book Review, Sophie Barnes, The Danger in Tempting an Earl