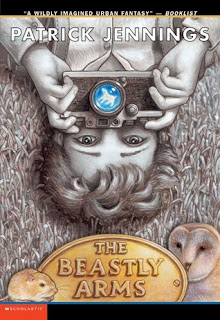 11-year-old Nickel and his mother need to find a new apartment. When their search takes them to an unfamiliar part of the city, Nickel is drawn to a strange building at the end of an alley - a building called the Beastly Arms.

Even though the rent in dirt cheap and the apartment is beautiful, Nickel's mom thinks the Beastly Arms is creepy. So does his best friend, Inez. Even his pet kangaroo rat, Miriam, seems worried. But Nickel, an avid photographer who has a gift for seeing what others don't, senses that the Beastly Arms houses a secret that only he can unearth..." - Goodreads

First off, I found this book in my local library while searching for other works by Brian Selznick. Apparently he is the illustrator for "The Beastly Arms" and I loved all of the illustrations in the book, as rare as they were.

I can't help but feel a similarity between Patrick Jennings' and Brian Selznick's writing styles. Their works have this melodic, fairy-tale way of portraying their stories, which I really love.

Nothing can be said about the story really, because I feel it's better diving into the book without knowing anything about it. All I can say is that this book was one happy story about photography and animals and being a decent human being.

There was not much going on, but as short as this book was, it really gave some insight and depth to the characters, as well as some really interesting topics to think about.

This is a children's book, but I think it's perfectly good for adults too. If you have a chance to read it - do it and you won't be disappointed.