Book Review: "But You Did Not Come Back" by Marceline Loridan-Ivens 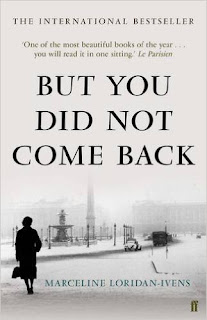 "A runaway bestseller in France, But You Did Not Come Back is the deeply moving memoir of a survivor of the Holocaust.

'I was quite a cheerful person, you know, in spite of what happened to us.'

In 1944, at the age of fifteen, Marceline Loridan-Ivens was arrested in occupied France, along with her father. They were sent to Auschwitz-Birkenau in Poland. When they arrived, they were forcibly separated. Though he managed to smuggle a last note to her via an electrician, she never spoke to him again.

But You Did Not Come Back is Marceline's letter to the father she would never know as an adult, to the man whose death has enveloped her life. With poignant honesty, she tells him of the events that have continued to haunt her, of the collapse of their family, and of her efforts to find a place in a changing world.

This is a breathtaking memoir by an extraordinary woman, and an intimate and deeply moving message from a daughter to her father." - Goodreads

I've read many novels about the Holocaust and honestly I expected something a little bit more heartbreaking, considering that this is a non-fiction coming from an author, who had survived from all the hardship in the concentration camps.

It was a well written novella, but I can't help but feel that something was missing for me to feel compassion and sadness while reading this book. I don't know if the reason was that the author just didn't want to remember all of the things she's been through, but I felt that the feelings were not there. It's as if the person writing the novella, was not the one who had to suffer.

I don't blame the author for wanting to forget the way she felt, when she was in Birkenau. I really don't. Because the sufferings she describes are not something anyone should have gone through. It's not a part of the history that anyone should feel proud of...

I appreciate the book for what it is, but if the author had let her emotions flow free and spread her story into more lengthy book, it would have been way better.
Posted by Жана Т. at 10:59 PM

Email ThisBlogThis!Share to TwitterShare to FacebookShare to Pinterest
Labels: Book Review, But You Did Not Come Back, Marceline Loridan-Ivens